I’ve almost always had a rush of nostalgia when India is about to tour England. The green grass, blue skies, the contrast between the “Surf-excel-white” clouds and the tourquise blue of the sky, the picturesque grounds, the lovely breeze and the occasional sweater worn by the spectator adds an element of other worldly magic to the drama that is about to enfold. India’s tours of England have brought back some lovely memories that run back to the summer of’96. There are several such occasions – the World Cup 99, the tour of 2002 and the Nat West final to name a few. The tour of 2007 seems so fresh, I can recall many of details – Zaheer Khan and the jelly gate, Dravid’s tired captaincy, his struggle with runs, Wasin Jaffer’s lazy elegance, Dinesh Karthik’s rise to consistent 45-50 opener, Kumble’s century, Micheal Vaughn’s batting, Tendulkar’s struggles in the 90s, and what not.

Part of what makes this special is a rather mundane aspect – the time of play for the Indian viewer. You can come back from work, either on a high, or tired and drained of energy, and let your mind take on something completely different and to be engrossed in it. There are days when the cricket energizes you and days when it lets you lament.

Another tour is upon us. And this tour, as in 2007, is touted to be last of the greats of India’s batting – Tendulkar, Dravid, Laxman. Thus the need to savor it is greater than ever before. One hopes that there is, somewhere in India, a kid who yearns to emulate their techniques and deeds!

India’s Tour of SL 2010: It starts with mysteries

Am I the only one to be surprized by Mendis’s exclusion?  He and Murali bowling from either ends gave the famed Tendulkar-Ganguly-Dravid-Laxman laden Indian lineup a run for their money in 2008. It would have been worth it to see how they rack up this time. One wonders if there was some under-the-table BCCI wrestling. One sure hopes not.

Why is Murali retiring after just one Test? Why not play the remaining two of the series?

If there’s one mystery, it’s that the umpire referral system is not be used in the India-SL series. No surprizes there?

Cricket Quickies: from Vengsarkar to Yuvraj and Younis

Yes, I promise to keep this short, for I’ve been rambling too much and I’m short of time but not of enthusiasm.

While channel surfing today, I caught a special on India’s tour of Australia in 1986 – an ODI at the MCG. Sunil Gavaskar was batting with a somber looking South India, whom I correctly guessed to be our very own Chika. While Chika’s simple style (at least of what I’ve seen in this innings) was catching indeed, what surprised me more was Dilip Vengsarkar. I’ve only known this man for the unkind words he’s had to say of Dravid. Today I got to the see the batting talent (among other things) that got him to the place from which he barbed. What struck me most in his expansive use of the crease, the sort of which reminds me of some 20-20 batsmen of late. The disregard for the stump guard that Vengsarkar displayed in this innings seemed very contemporary and is certainly not something I would have attributed to the batsmen from that age. Another thing that surprised me is that the next generation – Tendulkar, Dravid, Ganguly, Laxman and Co – did not seem to have this disregard for the stump guard, but in fact meticulously guarded it and in effect seem perhaps rather orthodox given such precedents. If you’re thinking I’ve watched only one innings from the 80s and that my observations are off-base, do enlighten me.

Meanwhile, “flat-pitch-bully” Yuvraj slammed an impressive century at Rajkot and the cricket site are abuzz with polls of whether Yuvi should make it to the Test middle order. Strangely 72% of cricketnext visitors seemed to think so, while 52% of cricinfo visitors seem to think not! Strange isn’t it? I’d be interested in knowing the age groups of the folks to who’ve voted and their vote. In case you’re wondering, I voted against, on both the sites. 🙂

Another thought struck me today while watching parts of Pak vs. WI clash today. While I’ve labeled most of India’s recent ODI matches as boring, I found this one to be the contrary. I was not yawning, or absently glaring, waving my hands unconsciously when a four was hit, but was actually watching. There was class in Younis’s batting today (Ten Sports interrupted this with the ICL). There were elements from the ’90s batting, wristy flicks and “towards the ground” shots reserved in Indian cricket only to Tests nowadays. Call me old fashioned, but this was good ‘old cricket, without the fracas. May it live long!

The much awaited Australia’s tour of India is over. India has won it 2-0. There is a sense of euphoria over the victory, but also disappointment over the quality of Aussie cricket. This was supposed to be the Border Gavaskar Trophy, the revenge series to avenge Sydney 08, the spirited fightback from both sides, with every session, if not every ball. There were phases of that, but sadly, what was supposed to last an entire series lasted only three sessions. The series was essentially one sided and I won’t be exaggerating in saying that we, Indian fans, were robbed.

Let’s look at this in a bit more closely, if you will.

Australia Batting: Top heavy, middle mostly missing except for Hussey with a fairly long tail. Yes, that’s the sort of batting that India had in the mid 90s. Their reliance on Hussey was reminiscent of India’s on Dravid until a very lately. Hayden was unable to score and by the time Katich found his foot to convert starts, the series was over.

Australia Bowling: Pacers did not take wickets, spinners made up the overs. Not much of a story there. Watson learnt some towards the end, but it was too little too late. Kreja is a definite prospect, but has a long way to go.

Captaincy: Ponting’s chinks in captaincy (and batting) are showing. Nagpur Day 4 overrate tactics was shocking, even raising suspicions of match fixing in some minds. That apart, we’ve seen nothing more than less than average captaincy. He’s been riding on the good fortune of having some champion performers in the past. Now that they’re gone, some creativity was required, which was lacking. But then again, the captain is as good as his team!

India Batting: Satisfactory, but could have done better given the big names and the conditions. Only Bangalore had low bounce, others seemed to aid batting more than bowling. So we should have gotten more runs. Harsh? Yes. We are a greedy lot when it comes to our famed batting line up. Gambhir did well, but has more to prove. If he survives the New Zealand series test, I’ll put a check mark next to his name. Viru, was his usual self. Dravid had a nightmare series, maybe when the Waugh curse passes, it will take the bad form along with it. I’ve said much about Dravid, so I’ll pass here, and just pray he finds his foot and grandly. To me, he’s still got it for two years at least. Sachin was again typical self- explosive at times, inglorious at other times. Ganguly impressed the most, and succeeded in his attempt to prove that he really shouldn’t be retiring. There was a sense of purpose in his batting, one so obvious in his ever since his 2006 comeback. Sad it had to be him, but the cries were almost deafening. Laxman, mostly good, mostly typical, but that is expected isn’t it? Dhoni, also typical, will butcher on a flat pitch and flop on anything else. I still think he’s got a long way to go as batsman. He’s banking on the “fear factor” he creates for the opposition. The new recruit and Ganguly-recommended Murali Vijay seems very solid. Is he the next Rahul Dravid? It’s too soon to give such huge tags.

India Bowling: Pacers very impressive on bata wickets. Spinners, could have done better, given the reputation, but maybe that has to do with the fact that the pitches didn’t exactly crumble. New recruit Mishra impressive, but again, lot to prove.

Captaincy: Kumble, satisfactory. It’s sad that both the drawn matches were captained by him. Dhoni, also satisfactory. Some of the field settings were refreshing, but I thought a couple of times, his keeping dipped ever so slightly during captaincy. Time will prove whether he can indeed keep and captain. He’s got a lot to prove before we can truly hail him.

In summary, perhaps it is Greg Chappell, who seemed to be behind Ponting’s century in Bangalore! Again, promising much and delivering nothing. After all of RCA’s hospitality, 22 odd different pitches, extra practice matches and all, this is all Guru Greg could do! Couldn’t resist that dig! 🙂

Sourav Ganguly: What he’s meant to me

Yes, the Australia series, is over. Yes, India have won it 2-0. Yes, Ganguly is really retiring. Yes, I’ve already written my Ode to Ganguly. But this is a little different and more personal, more rambly and possibly incoherent.

There is one person I always think of when I think of Sourav Ganguly: my friend from school. If it wasn’t for her, I would never have understood what it is to be a Ganguly fan. When we first discussed Ganguly – it came up casually, as we were discussing the 99 World Cup- she not only re-kindled in me the passing interest I had in Indian cricket then, but planted in my heart the love of a generation of cricketers and the glorious game. Here’s to you, my dear friend, and thank you a million! I may never have thanked you for this, but I mean every word of this. I may have detracted you that I was a Dravid fan (thought I turned out to be that too), may have hid my excitement when Ganguly was made captain, 8 years ago to this very day, but I think you know that I was a truly a Dada-fan (and continue to be). 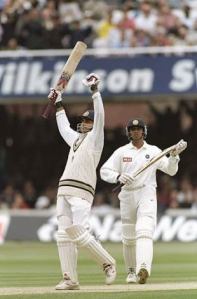 Ganguly on Debut at Lord's

With Ganguly’s retirement today, I feel a sense of void, for apart from other reasons, his moving also takes away a bit of the childhood that I’ve continued to live to this day, for Ganguly’s India brings to me many cherished memories: the sneaking from school to find out the score, the discussion over whether Rani Mukherjee or Sourav Ganguly represented Bengal better, the yearning for rain in May just to reminisce the World Cup ’99, watching cricket at night from different time zones with red eyes and having to go to a ghostly early class the next morning, that fateful March ’03 night of the World Cup final, the stupid match day superstitions, and many more. Maybe some memories will linger along with Tendulkar and Dravid, but the spirit of the Big Three, the Holy Trinity, the triumvirate, or whatever you want to call that, retires today, though the legacy will live on. Perhaps it was only fitting that Ganguly’s last battle was against Australia and that very apt that he left more people asking why Sourav and why not somebody else. But a fan will always rue his idol’s retirement!

Thank you, once again, Sourav, and Best wishes for a happy and healthy new innings!