It was a regular Sunday afternoon. The spirited Kotla crowds were cheering the stroke play of Laxman and Ganguly’s trademark six. Suddenly they fell very quiet. No, it was not the fall of an Indian wicket. Anil Kumble, the King of Kotla, had just announced that he would retire at the end of the day’s play.

Kumble, the cricketer, has been special to me in many ways. Aside of inspiring me to experiment spin bowling with a tomato, he’s done much inspire any average Joe that with hard work, one can scale great heights as Anil Kumble’s career is a tribute to this. As a bespectacled young man who took the field, he did not take the cricketing world by storm. He did not spike to success either. Kumble’s career progress has been almost boringly gradual, one nurtured by sweat, blood, toil, unrelenting hard work, a craftsman’s talent and soldier’s spirit. Yet underneath it all, there is a good human being, a man who managed the impossible task of staying clear of controversy in a cricketing nation that thrives on and devours it with voracious appetite. His manner was distinctly south Indian: low-key, polite, and humble. His success is testament to the fact that one does not need showmanship or bravado to reach great heights. All that is required is a committed soul that always gave a hundred percent to the task at hand. Success will automatically follow. 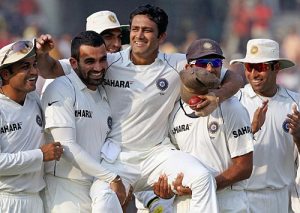 To an extraordinary man, one of the Fabulous Five of Indian cricket, and an excellent ambassador of the gentleman’s game, here is a shoddy free verse of praise:

Oh Captain, My Captain!
You have stunned us all
With your adieu today
Created a void
that will take more
than just talent to attempt to fill.

While you may be missing
From the cricket field
we will take pride and solace
that when the name of bowling
legends are flashed across
the screens in the years to come
we will read the name
Anil Kumble
etched with a grace that is
gentlemanly and so wholesomely Indian.

After promising much the Delhi Test is moving slowly and boringly towards a draw. As butter-fingered India dropped as many as four catches today, to let Australia off the hook, the most worrying aspect was the attitude and general lack of purpose. Ishant was wayward, Mishra didn’t look like the guy who took 7 wickets in the last match and Kumble toiled spiritedly to end up with three after largely disappointing spells, given his stature. While Sehwag weaved magic with the ball, he disappointed again with the bad. Where was the need for that shot? Ishant played a horrible shot for the first delivery he recieved as nightwatchman, and would have been gone that very ball. But it was his fate to face a carbon copy of that delivery and play the same shot only with a different result. So much for being nightwatchman. But perhaps it was Dravid’s fate to have to walk out today. Fellow blogger Soulberry sarcastically takes a dig at Dravs here. Was I the only one who was nervous for Dravs?

Tomorrow, most likely will not produce a result (unless we mess it up horribly), but India can use this well for batting practice. Dravid, this is your chance! The others have got their face saving centuries. For Heaven’s sake, Dravid, grab this, with both your hands, and show us some magic. And no runs per ball ratio nonsense.

While Gambhir continued his onslaught to get his maiden double century, VVS showed why he is a very special player and why the people who advocated dropping him for a fifth bowler should be embarrassed and hide. He plays very quietly, knocking it around and before you know it, he’s got a hundred. Give it some more time and he’s past 150. Vintage VVS was what we saw today. What struck me the most was his reaction on the century (gesturing a bowler). Why are the seniors taking the media so seriously? Media scrutiny has been happening for some time. Granted, it’s more targeted towards the Fab four now, but the best way to get them off your back is by ignoring them and performing.

That apart, there are many questions/concerns from today’s proceedings. First, Dhoni’s irresponsible innings. He isn’t captain, so he didn’t care enough. What does that tell you of attitude? I can point to several such instances now. Secondly, I thought Kumble declared a bit too early. They should not have given Aus more than 10 overs to bat. Why? Thirdly, can India bowl Aussies out twice on this track? Doesn’t seem to anything in it yet. Furthermore, what does this innings mean for Laxman? He may have got the monkey off his back for the next match, but there are now two monkeys on Dravid’s back. I will save my thoughts on VVS at #3 for after the Delhi Test, but there will certainly be some talk about this.

As for tomorrow, the first hour will be key. India will need 2 wickets in the first session. Post lunch is often a sleepy session and nothing much happens. If India don’t act quickly, we might be headed for a draw.

Wishing one of India’s best a wonderful year ahead.

May you scalp many wickets this coming year, Kumble.

The Mohali Pitch will not be the “usual Mohali” pitch. It will have bounce initially but will turn later. God! What does this mean? What do we do if we lose the toss?

Pacers and Kumble can use the bounce. But what if Ponting has figured out Ishant? Have all the Aussies gotten a hang of Kumble?

“Danger man” Stuark Clark may not play? But Peter Siddle may debut. What if our middle order can’t figure him out – given our records from a Lee in ’99 to Chris Tremlet in 2007 and Ajantha Mendis in 2008 (bowlers on debut)?

What if we can’t get Hussey at all?

It’s raining in Mohali. What could that mean?

Seriously, is it just me?